Five years ago, I launched a little side project called UI Movement which was a newsletter that featured five design animations every week. It's since grown in scope and popularity until the newsletter had close to 30,000 subscribers and the site was getting ~350,000 page views per month.

The featured designs came from various external sources, but one was by far the most popular. It made sense because that source was super well known amongst designers and it’s where they go to share their work.

The legal team from that website sent me a cease and desist for UI Movement a couple of months ago. Even though the featured designs always included attribution and links back to the original, they were clearly not happy that UI Movement was featuring content from their site. The email was a bit of a shock, but deep down I knew it could happen at any moment. Running a “curation” type site like UI Movement with most of the content coming from one source was always a risk.

I thought about making minor changes and hoping it would be enough, but decided to take a different approach.

The truth is, UI Movement is no longer a big part of my business and it was more of a passion project/hobby that I was slowly losing interest in. I was getting tired of featuring over-the-top design animations that would never make it into production or would be quite annoying for users if they did. While I still see value in finding inspiration from unrealistic designs, I wasn’t enjoying the process of curating them anymore.

Instead of shutting UI Movement down or making a few small tweaks, I decided to start from scratch and make a UI design inspiration site I could get excited about.

The end result is that UI Movement became Screenlane: A site that features web & mobile screenshots from live products for UI design inspiration. No more unrealistic prototypes. Admittedly, not the most innovative idea, but I believe I can get Screenlane to the point where it's providing as much or more value than UI Movement.

Screenlane has been live for ~3 weeks and I thought it would be a good time to share some numbers. This was more than a redesign or a rebrand with a domain change. It's all new content, a new domain, brand, and website. I had no idea what to expect.

Here are the numbers so far:

The announcement email included a big “unsubscribe” button after an explanation of the change and why it happened.

Since then, a couple more weekly newsletters have been sent and they both briefly mentioned the change. I'm hoping the number of unsubscribes will level off over time. 128 people have subscribed since the change, which is promising. 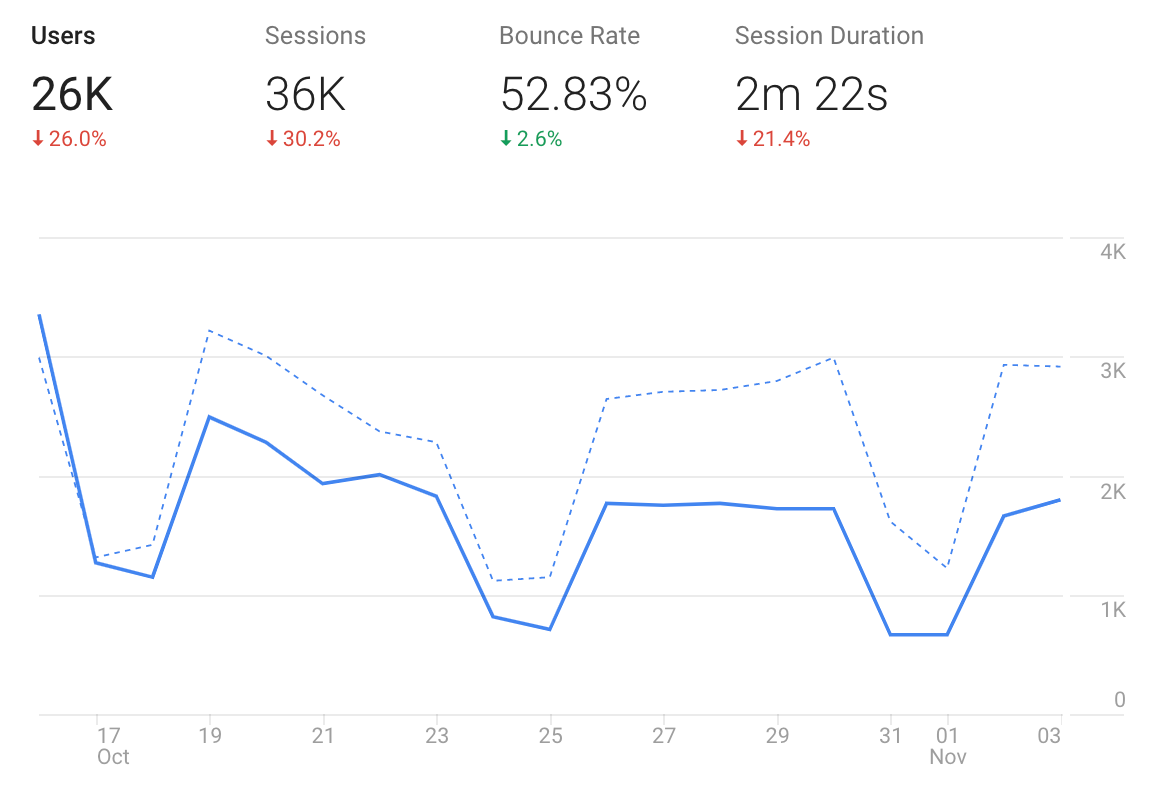 Traffic from uimovement.com is redirected to screenlane.com?ref=uimovement, which helps me track the trend of how much of the traffic is still attempting to go to UI Movement. I also submitted a "change of address" notice to Google through the Search Console.

I rarely heard from UI Movement subscribers until this change. At least half a dozen people have been in touch to let me know how how sad they are that UI Movement is essentially dead and how much value they got from it. A few people also shared some words of encouragement about the direction I've taken with Screenlane. It was both surprising and awesome to hear from subscribers. Honestly, I didn't expect as many people to be disappointed by the demise of UI Movement. I now feel a bit more pressure to make Screenlane great.

Overall, the decrease in newsletter subscribers is reasonably small, the drop in traffic is substantial, and the overall response to Screenlane is positive. I'm fairly happy with how things are going & it will be interesting to see if I can stop the downward trend and start growing the traffic & newsletter again.

It's been quite fun to make such a drastic change without worrying too much about the outcome. This whole situation would have been much worse if UI Movement was a significant part of the business or still drove a lot of traffic to Page Flows.